skip to main | skip to sidebar

1 Introduction
Most of the dsPIC30F microcontrollers have Run-Time Self-Programming (RTSP) capability. New application software code can be upgraded to the chip in field by different communication protocols. The most common communication protocols include: RS232, RS485, SAE-J1708 and Controller Area Network (CAN).

Note:
1. Above data is for reference only, it might be slightly different for different chips.
2. The last word of EEPROM is reserved for bootloader, e.g. for dsPIC30F6012A, it's EEPROM address: 0x7FFFFE.
1.3 Major features
1. Code-safety: the Au Group Electronics developed dsPIC30F CAN bootloader implemented Interrupt Vector Table (IVT) and Alternate Interrupt Vector Table (AIVT) remapping technology, which requires no erasing of IVT and AIVT section on any dsPIC30F chipset. This feature will also protect the "Reset-GOTO" instruction from being erased, which will guarantee the bootloader be always "alive" no matter what happened. The whole Bootloader section is also software protected, which prevents it from being erased by itself. Hardware protection on bootloader section is available on all premium editions.
2. Easy use: with the smart IVT and AIVT auto-remapping technology in standard edition and premium edition, the remapping process of IVT and AIVT is transparent for bootloader user. Both merged hex file (which has remapped IVT/AIVT information) and raw-application hex file (which doesn't have remapped IVT/AIVT information) can be used directly for standard edition(s) and premium edition(s). For code size reason, the compact edition doesn’t implement this auto-remapping technology, so it does require manually remapping the IVT/AIVT for each application.
3. Compact edition(s) are available for resource-limited application: Manually remap IVT and AIVT in hex file is required for compact edition(s).
4. Various CAN communication speed available: 500k bps and 250k bps baud rate are available, and other CAN communication speed can be developed per request.
5. Multiple bootloader entering methods available: Hardware trigger method is always available to force chip enter bootloader mode, optional software trigger method (which makes end user bootloading operation a lot easier) is also available.
6. Custom hex file merge service and IVT/AIVT remapping service are available
The above features are summarized in table 2.

1.4 Recommended CAN Network and CAN Transceiver Interface
CAN Network
Rule of thumb to make a reliable CAN bootloading process is: Do not mix different speed CAN nodes in the same network. All CAN nodes in the same network must all run the same speed, for instance 500K bps.
Figure 1 illustrates a typical vehicle CAN network, two 120 ohm terminal resistors must located at each end of the network backbone. An Au Group Electronics BLC-CAN device is used to translate hex data from PC to CAN network. The dsPIC30F microcontroller (MCU) on ECU 2 can be upgrade in field with Au Group Electronics developed dsPIC30F CAN bootloader technology. 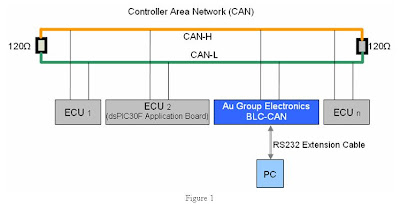 Figure 2 illustrate a minimum CAN network with two CAN nodes, which can be used to upgrade dsPIC30F MCU in a lab test environment.

CAN Transceiver
There are many CAN transceivers on the market, to make a smooth integration of Au Group Electronics developed dsPIC30F bootloader technology, hardware designer should secure that the CAN transceiver be default on status at all situation. Demo circuits are illustrated in figure 3a and figure 3b. 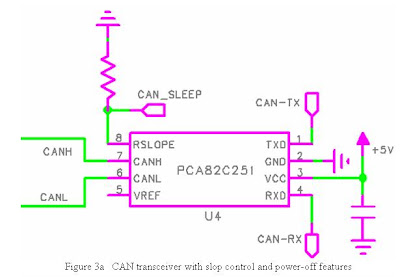 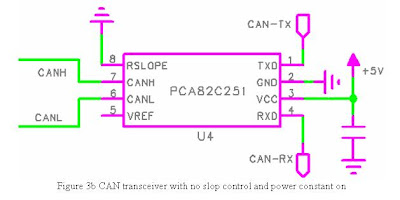 On this step, using a merged file (figure 4b) which contains bootloader code, application code, and IVT/AIVT remapped info, will save user some time overall because the bootloader code and application code is programmed into the chipset in one-shot. It is extremely important for high volume manufacturing.
2.2 Step 2: Bootloading
When the MCU has the bootloader software onboard, user can download a new application hex file or a new merged hex file to microcontroller through CAN network (figure 5) at any time. An Au Group Electronics developed BLC-CAN device must be used to convert PC RS232 signal to CAN signal.

Note: For compact edition(s) user, the application hex code must be manually remapped to have the remapped IVT/AIVT info.

The standard edition(s) and premium edition(s) of Au Group Electronics developed dsPIC30F CAN Bootloader include the smart auto-map technology which enables user use raw application file without manually remap the IVT and AIVT. The bootloader will auto-sense and auto-remap the IVT and AIVT during bootloading process without human interference. However a manually IVT/AIVT remapped application hex file (for instance, a merged hex file which contains bootloader code, application code and remapped IVT/AIVT info) still can be used.

For the compact edition(s), because of the bootloader space limitation, they don't have the smart auto-map technology, so the re-mapping process of IVT/AIVT must be performed manually and only a hex file with remapped IVT/AIVT info can be used for bootloading.

Both IVT/AIVT manual remap service and hex file merge service are available at Au Group Electronics.
The following chapters will demonstrate on bootloading a hex file through CAN network step by step, also how to merge an application hex file with a bootloader hex file is demonstrated.
3 Bootloading with BLC-CAN device & PIC bootloader program
After a bootloader has been pre-programmed into a dsPIC30F chip, user application code can be upgraded any time thereafter using the BLC-CAN device and the PIC bootloader program from Au Group Electronics.

Software trigger method:
This method requires integrating special CAN processing code into application software. It is an option feature for application code.
All Au Group Electronics developed bootloader support this feature for easy of use purpose. When this feature is supported, the "Reset PIC" button on "Au PIC Bootloader" software can be used to force the MCU entering bootloader mode.

3. Select an application hex file, e.g. "LedRotate.hex" in this case, then click "Open", as shown in figure 8. 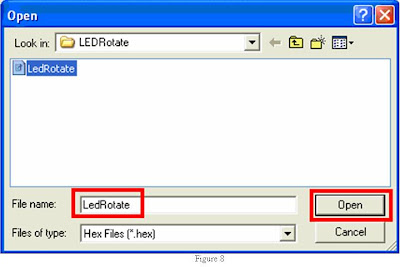 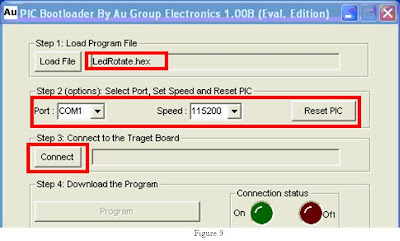 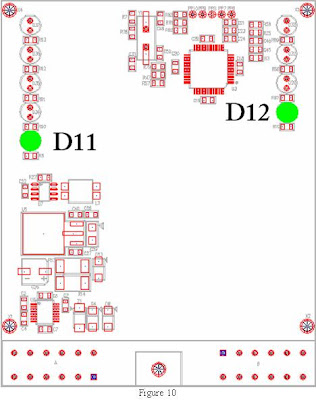 6. Within 10 seconds, click "Connect" button, as shown in figure 9.
7. The connection status ON indicator on PIC bootloader program will turn Green. Also the Bootloader LED (D12) on the demo board will be constant ON, click "Program" button ( figure 11) 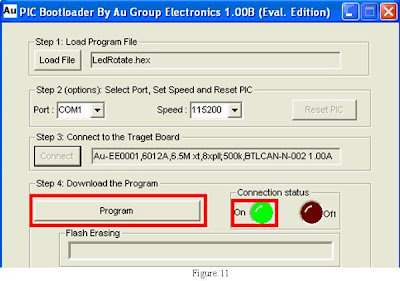 8. Flash Erasing and Programming progress bar will be moving as bootloading proceed, a long beeping on PC indicates bootloading accomplished, click "Exit" to close the program, as shown in figure 12. 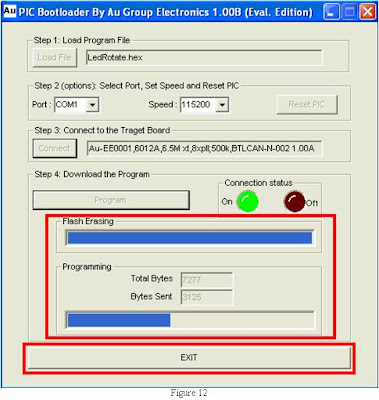 3. In "Select Device" window, select the chip from the Device dropdown list, dsPIC30F6012A is showing here for example, then click OK button (figure 15). 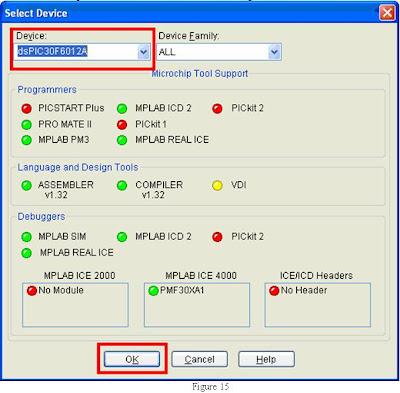 4. Click Debugger/Clear Memory/All Memory to clear all memory in microcontroller, as shown in figure 16. 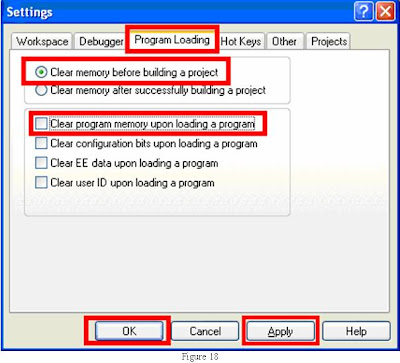 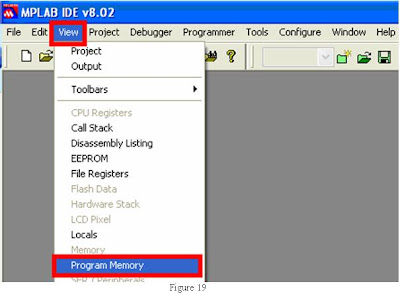 8. In the Program Memory window, click "PSV Mixed" or "Machine" or "Symbolic" tab, the "Opcode" should be "FFFFFF" in all Address, as shown in figure 20. 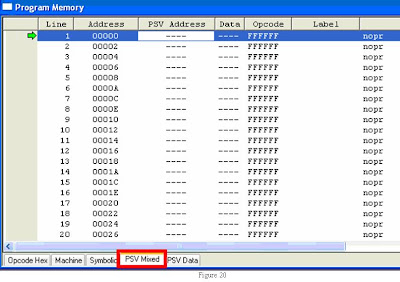 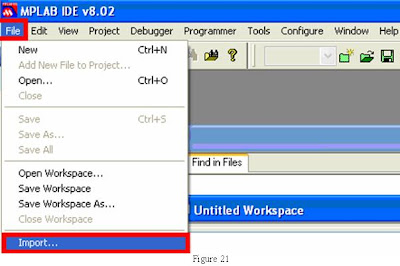 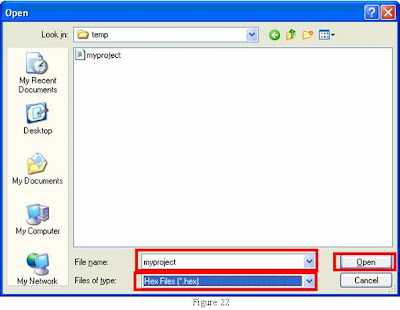 11. Check the Opcode from address 00004 to 0007E (address for IVT), and address from 00084 to 000FE (address for AIVT), write down all Opcode contents which are the interrupt vector address for each interrupt. They will be the address to be remapped after importing the bootloader hex file. 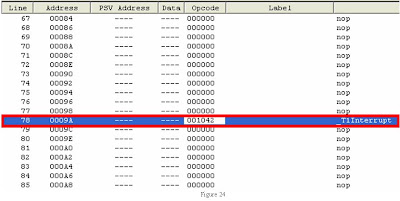 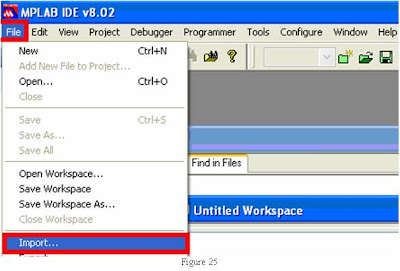 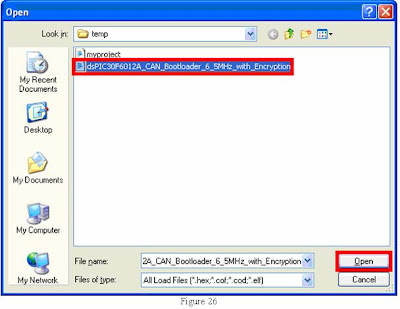 14. Notice that the Opcode content for address 0001A is 000E2C after importing Bootloader file (figure 27).

4.2 Manually Remap Interrupt vectors
Following steps use 0001A as an example to demonstrate how to manually remap the interrupt vectors to a new location.
1. In line 14, right click 000E2C of address 0001A to open a drop down menu, then click "Go To…" to open a "Go To" window, as shown in figure 28.

The above steps showed how to remap Time1 interrupt vector (0x0001A) step by step, for other interrupts, please repeat above steps 1-3.

1. Setup the CAN module in MCU with correct speed and filters
2. Monitoring incoming CAN data and save all CAN2.0A data from ID 0x0FD (which should have been reserved for the Au Group Electronics BLC-CAN device on a CAN network)
3. When a AT command string is found as: “AT BTLD RST \r\n”, execute the following two command in sequence:
a. Write "0XA55A" to EEPROM address "0X007FFFFE",
b. Issue a "Reset" instruction
After the MCU issued a reset instruction, the bootloader should be able to take over and force the chip entering bootloader mode for 10 seconds. This is a one-time only operation.
5.2 Configuration bit setting in application software C source code
User can set up configuration bits in C source code, the following code gives a working example.