skip to main | skip to sidebar

How to Program PICs (DIP) with Breadboard?

Author: Huihui Duan, Chaonan Chen, Au Group Electronics
There are many different approaches to program the DIP (Dual In-Line) PIC chips without very expensive programming fixtures.
This document provides one of the many possible solutions for Microchip PIC fans and Engineering students. It illustrates step by step instructions on how to use the AU Group Electronics BB0703 (PICkit2) and breadboard for downloading programs into the DIP PIC chips.
What you need:
How to connect the target PIC chip to PC for programming:
As illustrated in figure 1, by using USB cable, RJ12 6-pin reverse cable, and RJ12 programming extension cable, the target chip can be connected to your PC through BB0703 (PICkit 2).

Pin Number/Signal Identification of Target PIC Chips:
The following figures show two examples of ICSP pins on two DIP microcontrollers: a PIC12F508-I/P and a PIC18F4550-I/P. For any other type of chips, please refer to related Microchip Data Sheet.
PIC12F508-I/P
For PIC12F508-I/P, pin 1, 4, 6, 7, and 8 will be used for ICSP programming, these pins are highlighted with the same wire color of RJ12 programming extension cable, as shown in figure 2. 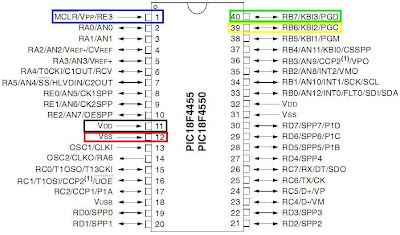 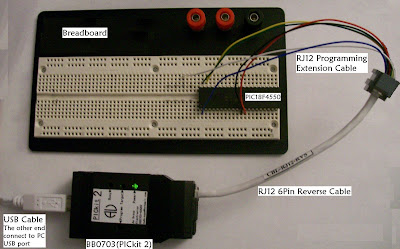 2. "PICkit 2 Programmer” window shows up, select PIC12F508 from the device drop down list, as shown in figure 6. 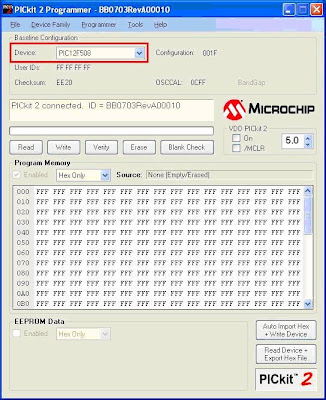 Figure 7 Import Hex file
4. Click “Write” button, the selected hex file will be programmed into the target chip, and “Programming Successful” message will display, as shown in figure 8. 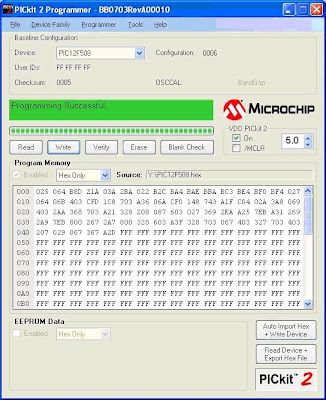 Figure 8 Programming Successfully
5. If more chips will be programmed, repeat 1-4 after a new blank-chip is installed as shown in figure 4. If same hex is used, you don’t need re-load the hex file.
Using MPLAB IDE software
1. Double click shortcut “MPLAB IDE” on desktop, as shown in figure 9.

Figure 9 MPLAB IDE shortcut
2. Click “Configure/Select Device…”, “Select Device” window opens up, select “PIC18F4550” from the device drop down list, then click “OK”, as shown in figure 10. PIC18F4550 will show up in the bottom status bar (not shown here in any pictures). 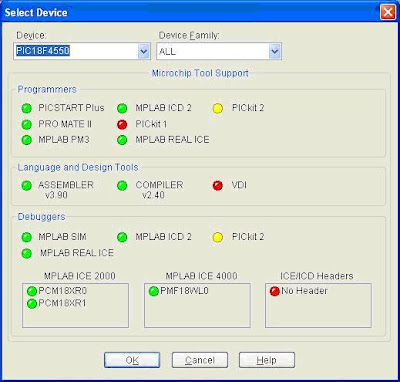 Figure 10 Select Device
3. Click “File/Import…” to open a xxx.hex file, the output window will show a hex file loaded, as shown in figure 11 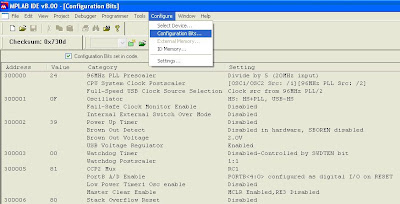 Figure 13 Select Program Device
6. PICkit 2 will initialize and a message “PICkit 2 Ready” will show up, as shown in figure 14.
Note: the message in the green frame may not display, it depends if there is a newer version of PICkit 2 operating system or not. Whenever there is a newer version available, it will be downloaded automatically by default. (The red highlighted icon is the programming icon.)

Figure 14 PICkit 2 is connected and ready
7. Click program icon, the hex file will be burned into the target chip. And similar message as shown in the blue frame will be displayed (see figure 15). 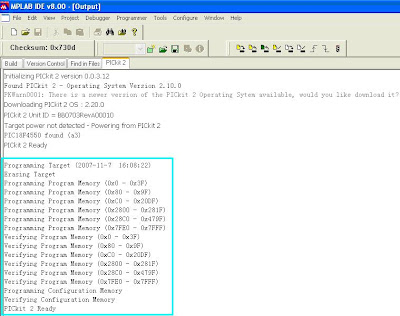 Figure 15
Note: After the chip is programmed, please disconnect the "RJ12 programming extension cable" and the "BB0703 (PICkit2)" by removing one end of the “RJ12 6Pin reverse cable” first, then, take the programmed chip off the breadboard.
If there are more chips to be programmed, please repeat steps 1-7 after the chip is inserted into the breadboard. Also you don’t need re-load the hex file if the same hex is used.
Posted by Support at 10:28 AM